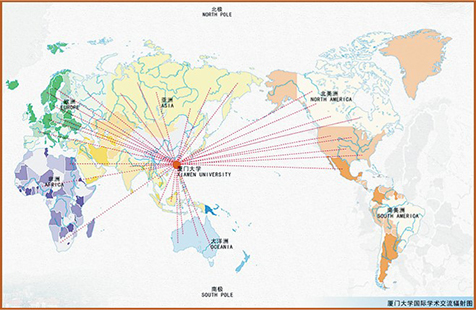 Actively seeking to enhance its global engagement, XMU has forged partnerships with more than 250 universities across the world. Xiamen University has initiated and participated in a number of global networks, such as the University Consortium of 21st Century Maritime Silk Road, Gu8 Consortium, ASEAN University Network, Erasmus+ Program, Global Engineering Education Exchange, etc.  XMU has also played a significant role in the international promotion of Chinese language, co-establishing 15 Confucius Institutes with its partner universities in North America, Europe, Asia, Africa and other regions and being authorized by the Chinese government to build the Academy for Confucius Institute Directors. Due to its favorable geographical and cultural proximities to Taiwan, XMU has become a leading center for Taiwan Studies and the academic and cultural exchanges with Taiwan.

Xiamen University Malaysia (XMUM) is the first overseas campus set up by a renowned Chinese university and the first Chinese university branch campus in Malaysia.On 21st January 2013, XMU received an official invitation from the Malaysian government to open a branch campus in Malaysia. On 4th October of the same year, in the presence of the Chinese President Xi Jinping, an agreement on China Development Bank’s all-round support for the construction of XMUM was signed. The ground breaking ceremony of XMUM was held on 3rd July 2014. XMUM welcomed its pioneer batch of students on 22nd February 2016. Currently, it has a student enrolment of about 5,020 students from 28 countries and regions, such as Malaysia, China, Indonesia, Bangladesh, Egypt, Zambia, Korea, Japan, Sri Lanka, Myanmar, Kazakhstan, Turkmenistan and Uzbekistan.